EDAM Group has been ranked at number 50 in the Sunday Times BDO Profit Track 100. In the 20th anniversary edition of the listing, the league table ranks Britain’s private companies with the fastest-growing profits.

We made the top half of the table by achieving a 71% annual growth of profit over the last three years. The company continues to go from strength to strength, with a turnover of £68million recorded in the most recent financial year, employing over 400 staff in the northwest and we have a vehicle fleet of over 2,000.

Steve Turner, Chief Executive Officer here at EDAM Group, said, “It is an honour to be named among the fastest growing companies in the country as part of this list. EDAM Group continues to reach new heights, picking up a number of recent award wins in addition to this newest recognition. As our business has grown at every opportunity, we are aiming to sustain this growth by continuing to uphold our commitment to customer service and business values.” 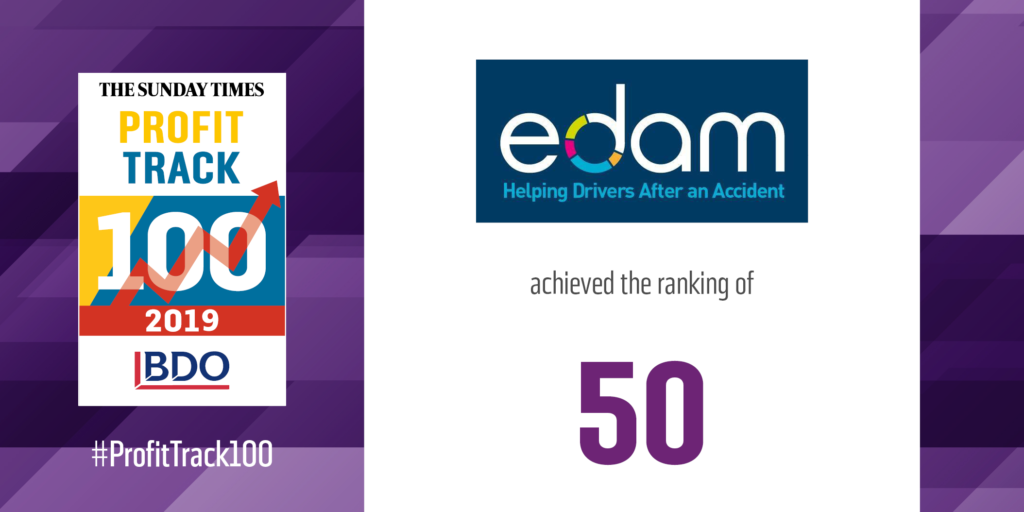 We have also received external recognition in the form of recent success in the awards industry. EDAM Group triumphed when we were awarded gold at the UK Customer Experience Awards, won silver accreditation at the Training Journal Awards and was awarded a 2-star accreditation from Best Companies.

Also in February, we were again recognised by the Sunday Times, placed 69th in the Sunday Times 100 Best Companies programme. We scored highly in multiple categories, including My Team, Leadership and Giving Something Back; praising our outstanding levels of engagement within its workforce.

We were one of 13 companies headquartered in the northwest of England to contribute to the league table, including 11 new entrants. Together, the region recognised in the Sunday Times BDO Profit Track 100 table employs 5,370 staff and achieved combined profits of £120 million.

Ed Dwan, partner in the northwest at BDO, the title sponsor of the league table, commented, “We pride ourselves on being the champion of the UK’s Economic Engine – those mid-sized, fast-growth, entrepreneurially minded business that are the backbone of the UK economy, generating more than their natural share of GDP growth and jobs. One of the ways we do this is through our sponsorship of the Sunday Times BDO Profit Track 100 league table.”

Back
Recent Articles
Technology that can save the day
Technology has progressed leaps and bounds over the last decade in so many different ways.  Some things we literally can’t live without. But there’s one that is not often spoken about which assists in road traffic accidents and vehicle theft.
Read More

A Bold New World
A EDAM we are getting our people safely back to the office and keeping their mental health at the forefront of our decision making.
Read More

Teamwork Makes the Dream Work
With teamwork being a critical part of success within a business, EDAM Group believe that there are multiple benefits for team members too.
Read More

EDAM is authorised and regulated by the Financial Conduct Authority (FRN 312942). This can be checked on the FCA’s Register by visiting the FCA’s website https://www.fca.org.uk/firms/financial-services-register
EDAM Group Companies